During the Buckingham Chamber of Commerce’s February 18 meeting, business owners Margaret Stout and Radha Midkiff updated Chamber members about their successes, struggles, business facts, growth and new approaches during our first installment of “How’s Business?” for 2020. Midkiff, along with her husband, Dick, own Corner Coffee Junction in Dillwyn and Stout owns Dillwyn Dairy Freeze. “This seasoned business owner and a newcomer to the food and beverage business world offered great insights into their operations and their successes,” said Chamber Vice President Thomas Jordan Miles III. “We’re glad they’re in our community and are part of the backbone of our county’s economy.” Pictured from left are, Miles, Stout, Midkiff, and Chamber President Krishna Jo Melendez.

The Buckingham Chamber of Commerce, in conjunction with the Corner Coffee Junction in Dillwyn, held a ribbon cutting ceremony to celebrate the opening of the new business on Main Street in Dillwyn.

“The Chamber is proud to assist and advocate for small business growth and creation,” said Chamber Vice President Thomas Jordan Miles III, who also serves as the representative for the Maysville District on the Buckingham County Board of Supervisors. “Small business is the backbone of our economy, and we’re so glad Dick and Radha Midkiff have invested in our community. We encourage support of their great and growing business.”

The Buckingham Chamber of Commerce honored four community leaders and one business during its Annual Awards Banquet for Chamber Year 2019.

“It is with great pleasure that I nominate Bill and Judy Kemp for the Buckingham Chamber of Commerce Lifetime Achievement Award,” wrote Sue Miles, who nominated the couple. The letter was read by Piedmont Area Habitat for Humanity Executive Director Jayne Johnson. “The story of Bill and Judy Kemp is one that is guaranteed to inspire others. Their drive and determination to serve their fellow men and women is obvious as you hear about their life journey and volunteer work. Whether it’s here in Buckingham County or literally across the United States, they have a story to tell,” Miles wrote.

While the Kemps moved to Virginia in 1974 and Buckingham in 2008, their service to their communities has spanned many decades.

“In 1988, after learning about the national Habitat for Humanity program, through a Reader’s Digest article, both Judy and Bill agreed that this program and its principles worked for them. Working with Presbyterian minister, the Rev. Greg Gregory, in Ashland...they began laying the groundwork for Hanover Habitat for Humanity. They also became involved with volunteer work in Appalachia, with an encumential organization called Christian Appalachian Project. This project brought volunteers into Appalachian communities for home repair and reconstruction,” Miles wrote.

Miles said the couple became involved in Habitat ‘builds’ and started caravanning with others who were known as Habitat Care-a-Vanners. “A bit like gypsies, they traveled from coast to coast. South in the winter, north in the summer; building Habitat houses in 29 states. “When the Kemps decided they needed a home base, lucky for us, it was Dillwyn. Along with continuing their volunteer work in Appalachia, the Kemps now are working with the Piedmont Area Habitat for Humanity (formerly known as Farmville Area Habitat for Humanity) and specifically the Buckingham County affiliate.”

“The Kemps are a great example of what caring people can do to make our community a better place.” Miles wrote. “Simply put, there are well over 100 families throughout the United States that are now living in decent homes because of the Kemps.”

McRae Jones was nominated by Thomas Jordan Miles III for the Volunteer of the Year Award.

“Donna’s selflessness, her dedication to her fellow man, and her willingness to donate her time for the betterment of the lives of others’, serves to meet the measure, as President John Kennedy stated, when we sought to put a man on the moon,” said Miles, who serves on the Buckingham County Board of Supervisors representing District 4/Maysville District and serves as Chamber Vice President. “Kennedy said, this nation chose this goal and many others, “not because they are easy, but because they are hard, because that goal will serve to organize and measure the best of our energies and skills.” And the community engagement and involvement of Donna McRae Jones embodies this call.”

“She’s played an integral role in her 10 years in helping restore the Buckingham Chapter of Relay for Life,” Jordan said. “During the time of the Buckingham Ruritan Club, and even after it’s folding, Donna has continued to keep the Buckingham Memorial Day Ceremony going, organizing and collaborating with other groups to make this annual event happen, including Buckingham JROTC, the American Legion Post, and the VFW Post. She’s worked alongside many great men and women to keep this great tradition alive.”

As leader and Chairman of the Habitat for Humanity Buckingham Build, Donna has assisted with and overseen the fundraising and public relations for the construction of five new homes and one home rehabilitation, literally helping put vulnerable people in secure and safe homes, helping our neighbors in Dillwyn and across Buckingham succeed, Miles said. “And, this month marks her initial term in the office of President of the Board of Directors for the Piedmont Area Habitat for Humanity, one of few Buckingham residents to hold this leadership position.”

Betty Shapiro nominated Windy Hill Pet Care as the Business of the Year.

“Windy Hill opened in early 2017 and I must say they keep growing and growing,” she said, noting “word of mouth has been letting people know the super place, great service, and comfortable feelings you get when you board your dog at their facility. Jon and Kristen Ober, the owners, are the keepers of the troops. I have used their services several times a year and can truly say my dachshund is always sad to go home.”

She said their kennels are state of the art and the play yards are separated by who can play “with who seniors who just mill around and need extra attention or the jet set who need lots of running space and exercise time. If you come at anytime you are apt to see Jon or Kristen or both out there playing catch, sitting and holding, petting, rubbing, and giving love and snacks to their boarders.”

Shapiro concluded by noting that “Buckingham was lucky when the Obers decided to move here and open Windy Hill Pet Care (and) their facility and their care of the animals make it the place to be.”

She said she has seen Agee, a Glenmore resident, “grow into a leader and respected friend among his peers” when he was in the Buckingham FFA.

“Trevor is a young man who has worked hard academically and outside of the classroom. Trevor graduated from Buckingham County High School as a honor graduate in 2019 with a 3.8 GPA. Trevor is also an active member of the Glenmore Fire Department following in his grandfather and father's footsteps. Trevor was Glenmore's first junior firefighter to join the department in November of 2018. Trevor continues to improve his firefighter knowledge by taking EMT classes. Trevor aspires to grow in the firefighter profession throughout his life.”

Davis noted Agee was an an active member of the Buckingham FFA, holding several officer positions with the highest being president his senior year, accumulating several accolades.

“When Trevor was in middle school when he started working after school and summers at his family's business, Dillwyn Repair Service. Trevor is currently employed there where he works alongside his father. Trevor and his father also operate a firewood business in the fall and winter and lawn care in the spring and summer. He has grown in his knowledge of the business and has taken on greater roles and responsibilities as he has gotten older,” Davis said.”

Davis said she has told (Agee) several times that he “is the type of young man that I want my son to be like when he gets older. Trevor is humble, has a servant's heart and does not do things for recognition.” 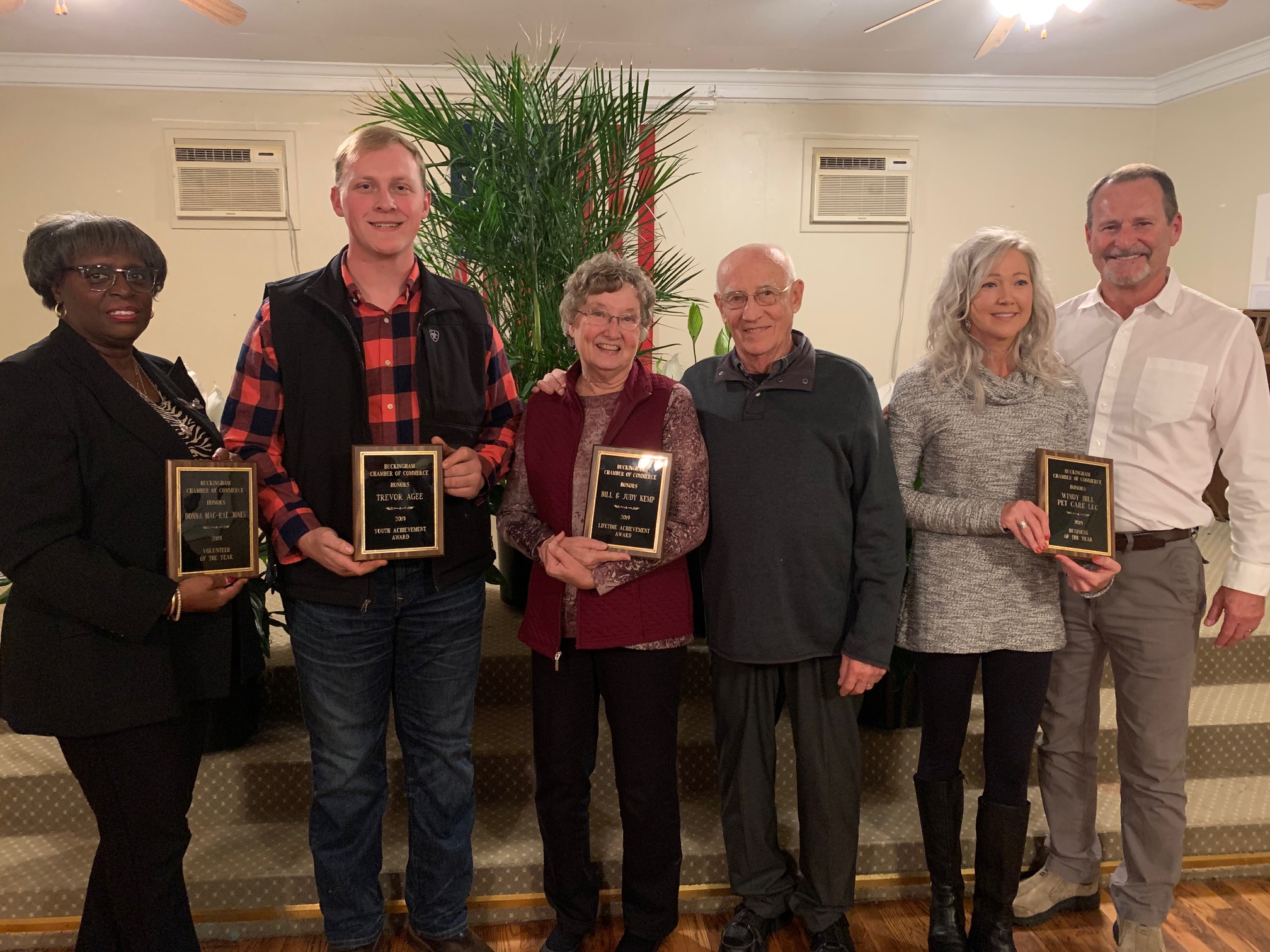 Central Virginia Community Health Services (CVCHS) has been named the October Business of the Month by the Buckingham County Chamber of Commerce.

“The Health Center and CVCHS employs many of our county residents and takes care of our family and neighbors,” said Chamber Vice President Thomas Jordan Miles III. “The Chamber is proud to recognize the system, the centers, its staff and all their clients for a job well done.”

The store, which has undergone many recent improvements, is located on Route 60 just east of the courthouse village, and offers fuel, along with hot food and groceries.

"The Chamber is proud to recognize and promote small businesses in our community," said Community Pride Award Co-Chairman Thomas Jordan Miles III. "Ajay and Nikhil Patel have worked hard to improve the exterior and interior of their store, and the public, their customers, and the chamber have all noticed these positive measures." 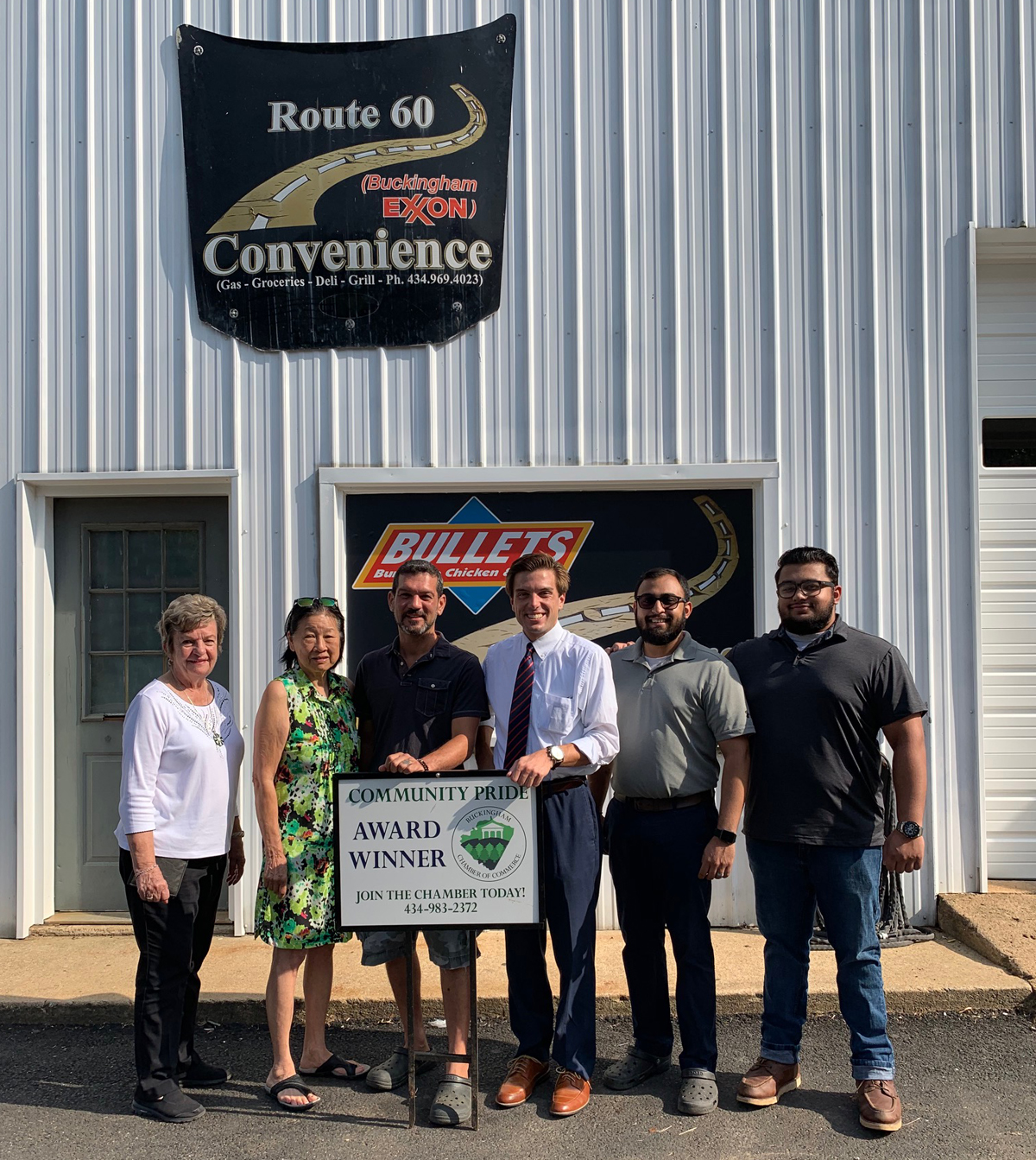 The Buckingham Chamber of Commerce recently participated in the ribbon cutting ceremony at the new location of Fisher Auto Parts, now located on Oak Street adjacent to Reid's Super Market and across from Dairy Freeze.

"We take great pride in helping expand the network of small businesses in Buckingham County," said Chamber Vice President Thomas Jordan Miles III. "The chamber allows for great exposure of what our local and small businesses do and offer for their existing and potential consumers. We're glad Fisher has moved and expanded and wish them all the best." 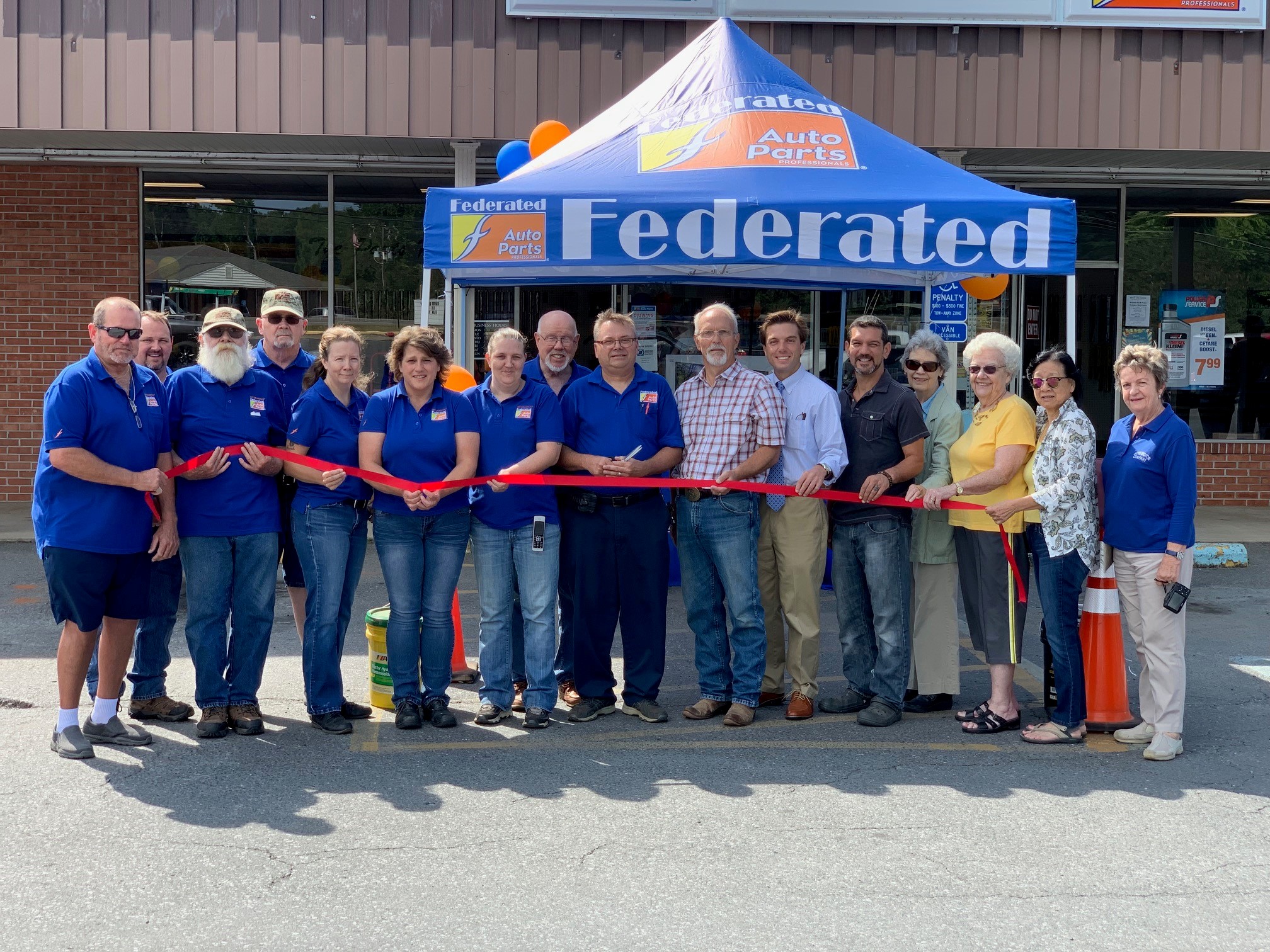 The "How's Business" installment of the Buckingham Chamber of Commerce's Tuesday, July 16 meeting drew a large crowd from the community. During the meeting, Lucky's Convenience Store Owner Tom England and Central Virginia Christian School Administrator Cherie Brickhill spoke about how the successes of their respective businesses and institutions.

"Tom and Cherie are great community supporters, and the Chamber very much enjoyed hearing what their strategies for success were," said Chamber Vice President Thomas Jordan Miles III. "We also learned what their biggest headaches are, how many people they employ, and their plans and thoughts on growth." Pictured are, from left, Tom England, Chamber President Krishna Jo Melendez and Cherie Brickhill.. 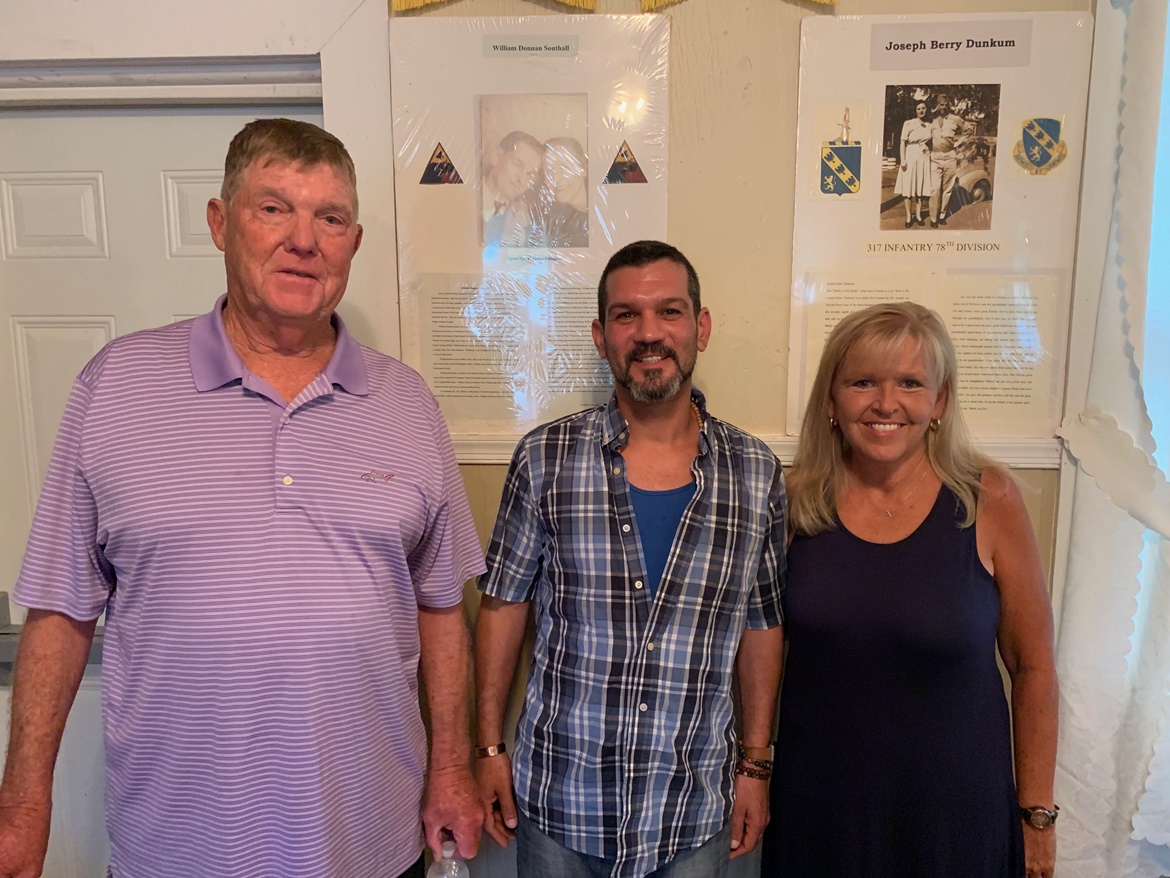 The Buckingham Chamber of Commerce Board of Directors voted unanimously Monday to donate $500 toward the Dillwyn Truck and Tractor Pull, presented by Buckingham Volunteer Fire and Rescue, which is set for Saturday, July 27 at 7 p.m. on Wingo Road behind the rescue squad building.

"We are very proud to support our hard-working volunteer men and women in their efforts to unite the community," said Chamber Vice-President Thomas Jordan Miles III. "We encourage other businesses and members of the community to do the same by becoming sponsors of this great event and attending the event later this month."

The donation makes the Chamber is silver sponsor of the event.

Tickets to the event are $15 with children 10 and under being admitted free, and food and beverages will be sold on site. For more information on the event, call 434-390-2663.